You are here: Home / News / Thanks to Clubland in Daily Hampshire Gazette for cool article! 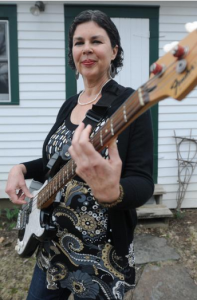 Thanks to Clubland in

Click here to read a fun interview about how we got to making Groove Duets and some history of The O-Tones. How they met, how they ended up in Massachusetts from Atlanta! You’ll learn little known facts about The O-Tones, their musical repertoire, and how they make all their songs their own. 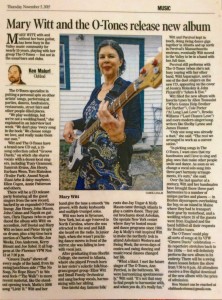 Mary Witt, with and without her bass guitar, has been busy in the Valley music community for nearly 25 years, playing with her group The O-Tones — but not in the usual bars and clubs.

The O-Tones specialize in putting a personal spin on other artists’ songs, performing at parties, dances, fundraisers, restaurants, street fairs and other people-filled places.

“We play weddings, but we’re not a wedding band,” she explained in an interview last week. “We don’t play ‘every song in the book.’ We choose songs we love, and really make them our own.”

There will be a CD release party featuring all the guest singers from the new record, backed by an expanded O-Tones lineup: Jim Henry, John Mason, John Caban and Nayak on guitars, Chris Haynes (who co-produced the album with Witt) on accordion, Jeff Dostal and Mary Witt on bass and Pieter Struyk on drums, plus a big-time horn section of Charles Neville, Jon Weeks, Don Anderson, Kerry Blount and Joe Sabol. It all happens at the Florence VFW Nov. 12 at 7:30 p.m.

“Groove Duets” shows off every angle of the band, from its swing/jazz/blues side (“The No Soap, No Hope Blues”) to ’60s soul feels (“The Walk”) to more recent material, like the standout opening track, Mutlu’s 2008 song “Livin’ It.” Witt and her band give the tune a smooth ’70s groove, with dusky keyboards and multiple trumpet solos.

Witt was born in Syracuse, New York, but at age 9 moved to North Carolina, where she was attracted to the soul and R&B she heard on the radio. In junior high, when she wasn’t practicing dance moves in front of the mirror, she was falling in love with vocal jazz.

After graduating from Oberlin College, she moved to Atlanta, where she played French horn in her sister’s eclectic folk/bluegrass/gospel group (Elise Witt and Small Family Orchestra) and sang backup vocals, harmonizing with her sibling.

“What a blast. I met the future singer of The O-Tones, Ann Percival, in the bathroom. We were harmonizing spontaneously,” Witt said. “It’s not that easy to find people to harmonize with, and when you do, it’s really fun.”

Witt and Percival kept in touch, doing swing dance gigs together in Atlanta and up north in Percival’s Massachusetts environs; eventually Witt moved to the Valley to be in a band with her, full-time.

Percival still performs with The O-Tones (when she’s not busy touring with her other band, Wild Asparagus), and is one of the duet singers on the new CD, appearing on the cover of Jessica Molaskey & John Pizzarelli’s “Adam & Eve.”

“Only one song was already a duet,” she said. “The rest we arranged to work as a conversation.”

“In picking songs in The O-Tones, I want ones that my bandmates and I love to sing and play, ones that make other people smile and dance. As soon as we change a vocal solo song into three-part harmony arrangements, it’s ours,” she said.

Over the last quarter of a century, Witt and her bandmates have brought those three-part harmonies to a number of unique parties and places — in Boston skyscrapers overlooking the bay, on an island in Maine where they had to transport their gear by motorboat, and a wedding where 25 of the guests were from England and the band fulfilled all their requests for Beatles tunes.

The O-Tones’ could play all sorts of songs at its VFW “Groove Duets” celebration — its repertoire stretches back to the 1930s — but will definitely perform the new album in its entirety. There will be a swing dance lesson before the show from 7:30 to 8 p.m. All attendees receive a free digital download of the new album with the price of admission.

Ken Maiuri can be reached at clublandcolumn@gmail.com.